This is a story not for the faint of heart. The crimes committed in this story go against the natural law and may be disturbing for some readers. Keep your wits.

Police enter the home of 44-year-old John Price, at the call of worried friends and co-workers, after he didn’t show up to work that day. They find a horrifying scene. A table set for two. A plate of baked potato, pumpkin, beetroot, zucchini, cabbage, yellow squash, gravy and meat for each guest. A note with their name beside the plate. A pot on the stove. The pot was warm and contained more vegetables… and a human head.

The skin of John Price hung on a meat hook in the doorway between the kitchen and the lounge room, his headless body in the floor. His de facto wife Katherine was found unconscious and unresponsive on their bed. Blister packets in the bedroom revealed she had attempted to overdose on painkillers.

Barbara Roughan and her illicit lover Ken Knight welcomed fraternal twins into the dysfunctional family. Katherine Mary Knight was one of them. Ken was an alcoholic and a violent man, he used fear and intimidation and ruled the family with an iron fist. He used that violence and intimidation to rape Barbara up to 10 times a day. Barbara openly expressed her hatred of sex and men to her children, however when Katherine approached her complaining that a partner wanted to do a sexual act that she was not comfortable with her mother responded with “just put up with it and stop complaining”. Katherine was frequently sexually abused by members of her family throughout her childhood, as confirmed by family members.

The only family member, besides her twin, Katherine was close with was her Uncle Oscar. When he committed suicide in 1969, Katherine was devastated and the family moved to Aberdeen. She attended Muswellbrook High School where she exhibited intense rages to minor upsets. She assaulted students and teachers, but by contrast, she was a model student when her rages subsided.

Without learning to read or write, Katherine left school at age 15. She took up a job at a clothing company before securing what she would refer to as her “dream job” at the local abattoir (slaughterhouse). She began as a general labourer, cleaning up blood and flesh from the floors but was soon promoted to a cutter, and then quickly promoted once again to boning. She was gifted a set of butchers knives by the abattoir, which she proudly hung above her bed so they “would always be handy if [she] needed them”.

Katherine marries a heavy drinking co-worker named David Kellett. The marriage was low-key, celebrated at the registry office and then to the local pub with friends. The troubled nature of the marriage began early, however, with Katherine attempting to strangle David on the night of their wedding after he fell asleep. Katherine’s reason for waking David with her hands around his throat being that they only had sex three times before he fell asleep.

It appeared that everyone knew something was up with Katherine, including her mother. David was quoted as saying;

“The old girl said to me to watch out. ‘You better watch this one or she’ll fucking kill you. Stir her up the wrong way or do the wrong thing and you’re fucked, don’t ever think of playing up on her, she’ll fuckin’ kill you.’ And that was her mother talking! She told me she’s got something loose, She’s got a screw loose somewhere.”

The violent and turbulent marriage brought a child into the world, but not before a heavily pregnant Katherine burnt all of David’s clothes before hitting him across the head with a frying pan. This was due to the fact David had arrived home later than expected from a darts tournament because he made the finals.

Katherine gave birth to her first child, Melissa Ann. However, a baby could not save this marriage and David left Aberdeen for Queensland and set up with another woman. He was tired of Katherine’s possessive, violent behaviour and wanted out. This drove Katherine into a frenzy. She was seen walking down the main street of Aberdeen with her daughter in a pram, violenting swinging the pram from side to side. She was admitted to St. Elmo’s hospital and diagnosed with postnatal depression. After her release from St. Elmo’s, Katherine took two-month-old Melissa down to the railway line and placed her on the train tracks. She left the baby there, apparently minutes before a train was due to pass. A local man name “Old Ted” found Melissa and rescued her before the train came. During this time, Katherine had stolen an axe, walked into town and was threatening to kill people. Katherine was again arrested and taken to St. Elmo’s, however, she signed herself out the next day.

If I detailed every aspect of Katherine’s fucked up life, we would be here all day and we would never get back to John Price and his decapitated body. If you want the full stories, check out Casefile (Podcast) Episode 12 on Katherine or the Murderpedia article.

Here’s some of the fun stuff that happened between the years 1976 and 1990, regarding Katherine Mary Knight.

1976, Slashed the cheek of a neighbour and told her to drive her to where David Kellett and his mother lived in Queensland, so she could kill them.

1976, Threatened to kill the mechanic that fixed David’s car so he could leave her.

6 March 1980, had another daughter with David, Natasha Maree

1984, left David (but it was all going so well!), moved in with her parents, then rented a home near Muswellbrook

1984, returned to work at the abattoir

1985, injured her back, goes on the disability pension

May 1987, Katherine slits the throat of David Saunders’ two-month-old dingo puppy because she wanted to warn him what would happen if he ever had an affair

1989, Katherine pays off the house her and David Saunders put a deposit on with her compensation money. She decorates the house with animal skins, skulls, horns, rusty animal traps, leather jackets, old boots, machetes, rakes and pitchforks. Beautiful decor.

1989, an argument ends in Katherine branding Saunders face with a hot iron and stabbing him with scissors. Saunders later buggers off and went into hiding.

1990, Katherine is pregnant again, this time by John Chillingworth, a co-worker from the abattoir. The following year, baby Eric is born. Within three years, Katherine leaves Chillingworth for someone she’d been having an affair with for some time, old mate, John “Pricey” Price.

Well aware of Katherine’s reputation and taste for violence, John Price still believed she was the one for him. He had divorced in 1988 but had an excellent relationship with his ex-wife, Colleen. His youngest daughter lived with his ex-wife but the two older children remained with him. John worked at the local mines and was pretty well off. 1995 saw Katherine move into his home, but the fact Price refused to marry her was a point of conflict. He wanted his kids to get all of his assets when he died and didn’t want Katherine to have any rights to his property, therefore he continued to refuse to marry her.

1998 saw another outbreak over Price’s refusal to marry Katherine. She retaliated this time but videotaping items in his home that he had taken from the rubbish tip at the mines and sending them to his bosses. Price was fired from the job he had held for 17 years, and he threw Katherine out. She returned to her own home whilst the town found out what she had done. A few months later, however, Price allowed her to return and they resumed the relationship, this time with more fighting.

A series of assaults on Price culminated in Katherine stabbing him in the chest. He did not seek medical treatment, but he did kick her out of the house once again.

Price stops by the courthouse on the way to work to get a restraining order taken out on Katherine. He tells his co-workers if he doesn’t make it to work the next day, she’s killed him. John Price spent the evening at a neighbours house, before returning at 11pm and going to sleep. Katherine Knight arrived at Price’s house later that evening. She came into the house whilst Price was sleeping, watching TV for a bit, she then had a shower. Katherine woke Price and they had sex.

What happened next still rocks investigators to the core.

Police and autopsy find that Katherine Mary Knight had stabbed her de facto husband, John Price, 37 times with a butchers knife. It appears he woke during the attack and attempted to escape, making it to the front door before either passing out from blood loss or being dragged back inside by Katherine. Katherine had dragged him into the lounge room, where she carefully skinned his body, with the precision of the expert meat cutter she was. The pelt was in one piece and left hanging on the meat hook in the doorway. She then removed Price’s head with the same precision. She cut off his buttocks, slicing them into steaks and then cooked them in the oven. She set up two meals, each with a note with his two oldest children’s names on them. Katherine intended the meals for them when they returned home. A third meal was thrown on the back lawn, it is still unclear why. Some speculate Katherine attempted to eat it herself and couldn’t go through with it.

Katherine Mary Knight becomes the first woman in Australian History to be sentenced to life imprisonment without possibility of parole. She is currently serving her time at Silverwater Women’s Correctional Centre. She is 62-years-old. 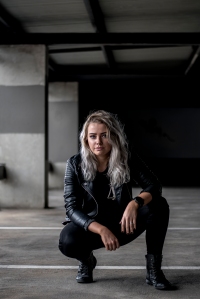 TrueCrime365 is a True Crime blog written by Bee Jamieson.

Bee Jamieson is a writer, photographer and filmmaker as well as lead researcher for Death Became Her Podcast.